340B and the Lockheed F-117 Nighthawk: Managing Post-Discharge Re-classes: A 'Stealthy' Problem

I already hear a few of our Curmudgeons chastising me for drawing a comparison of the Lockheed F-117 Nighthawk (Stealth Fighter) and 340B.  As before, I promise to explain this in a brief note at the end of this blog, and even the most curmudgeonly curmudgeon will agree there is a link, albeit remote.

From time to time and for a variety of reasons, a patient’s admission status may be re-classed post-discharge.

We see this most often with Observation Patients.  In some cases, information gleaned from the chart after discharge reveals the patient qualifies as an Inpatient, not an Observation Patient.  Of course, this can also be an Inpatient whose acuity was lower than originally thought, and they become re-classed as an Observation Patient post-discharge instead of the original Inpatient Status. Phew.  Long sentence.  Frank T Hardesty would frown.For those unfamiliar with the name, suffice it to say T. Frank insisted no sentence should exceed 22 words.

This figure (from this blogger) shows a spaghetti bowl flowchart of a typical split billing process. 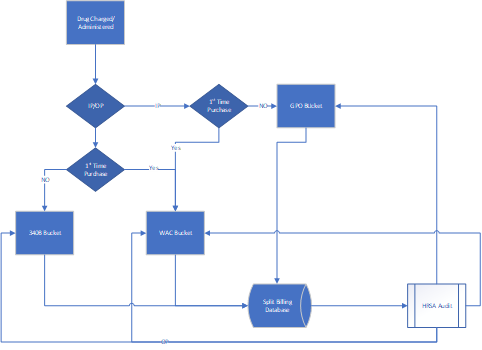 The problem with this is that the patient’s status was modified as mentioned above – they no longer show the same status in the medical record as is shown in the HRSA audit report.  Now there is a problem, and HRSA calls it DIVERSION if it’s a 340B drug used on an inpatient, and GPO VIOLATION if it’s a GPO drug used on an Outpatient. (figure from this blogger) 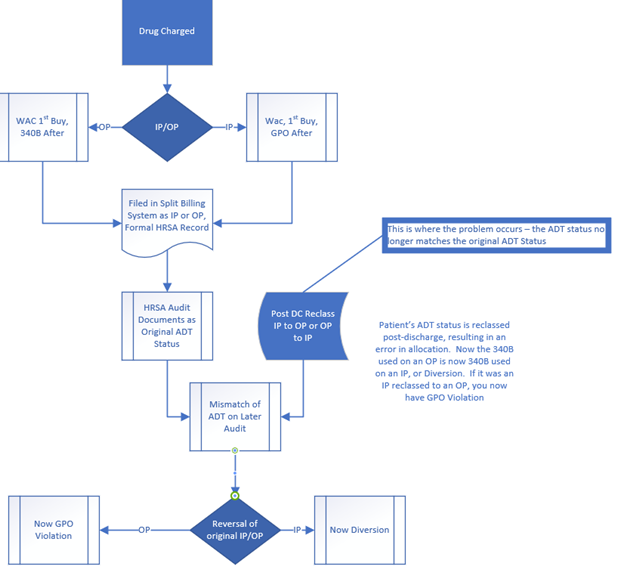 Your facility can lose 340B eligibility for a GPO violation, and at a minimum, be required to write up a corrective action plan for a 340B Diversion, as well as investigate the scope/extent of the issue, etc.

So: this is a problem. And a potentially serious problem.

Likely the payback potential is low.  But we find that sometimes the work required to file a corrective action plan is onerous, and being placed publicly on a list that claims Diversion or GPO prohibition is worse than wearing a ‘Scold’s Bridle’ in medieval Europe. The image is from Kelvingrove Art Gallery and Museum in Glasgow, Scotland. 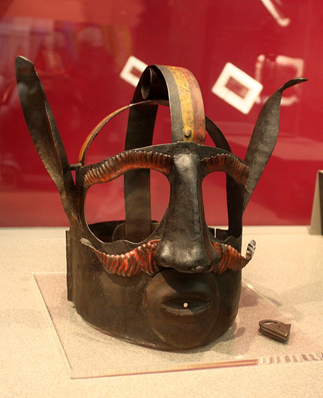 The good news: this is relatively easy to fix, taking a minimal amount of cooperation from your billing team, and very little time from your 340B Team to resolve. Here is how to fix it and be fully compliant.

You are now far ahead of the average 340B Covered Entity who is not as Astute as your team, and you have bragging rights at the next 340B coalition when you ask others if they’ve addressed this same issue.

And before anyone asks, yes, we discussed this situation with a couple of HRSA auditors.  Those that I spoke with noted seeing this as an issue.

And as always, if you care for support on this, or any 340B topic, reach out to your friendly neighborhood CPS 340B Consultant.  You can do this with a click on this email link:  340B.Help@cpspharm.com.

And now as promised, for the tie-in of 340B to the Lockheed F-117 Nighthawk Stealth Fighter.

Back in a previous life, I frequently visited a remote location adjacent to an Air Force Base where new F-117 pilots were trained.  I have vivid memories of driving across the desert, watching tight formations of the F-117 being shadowed by an F-16 non-stealth fighter.  The F-16 flew that tight formation, for overhead protection practice, and it also showed up on Air Force and Civilian radar, whereas the F-117 did not.  So this was a safety feature that allowed everyone to pick up on a ‘stealthy’ problem.

See, it ties together.  Consider the post-discharge reclassification as the ‘Stealthy’ F-117, and your new procedural fix is the fighter providing the safety net.   It’s a match.

Until the Next Blog: Be Compliant!